All of our Deluxe Rooms include: 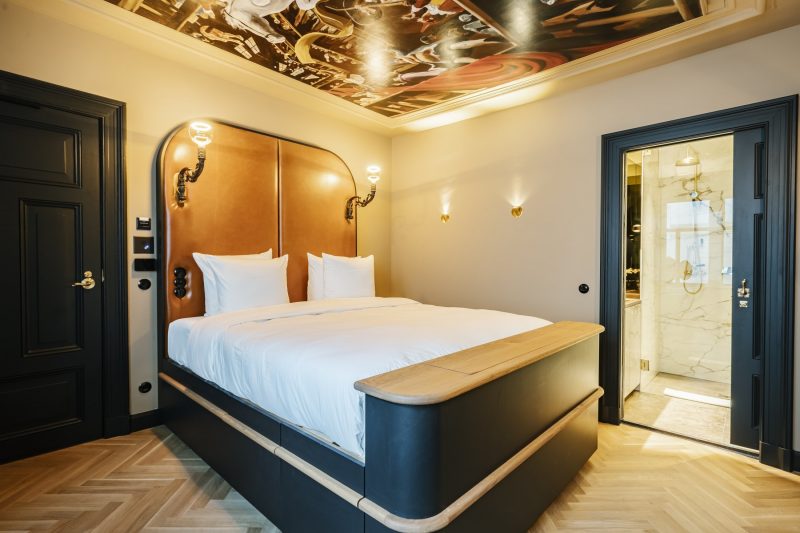 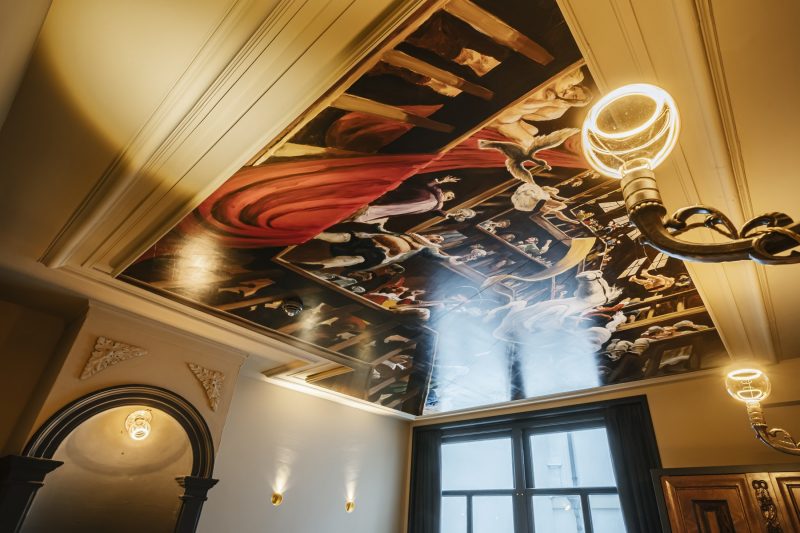 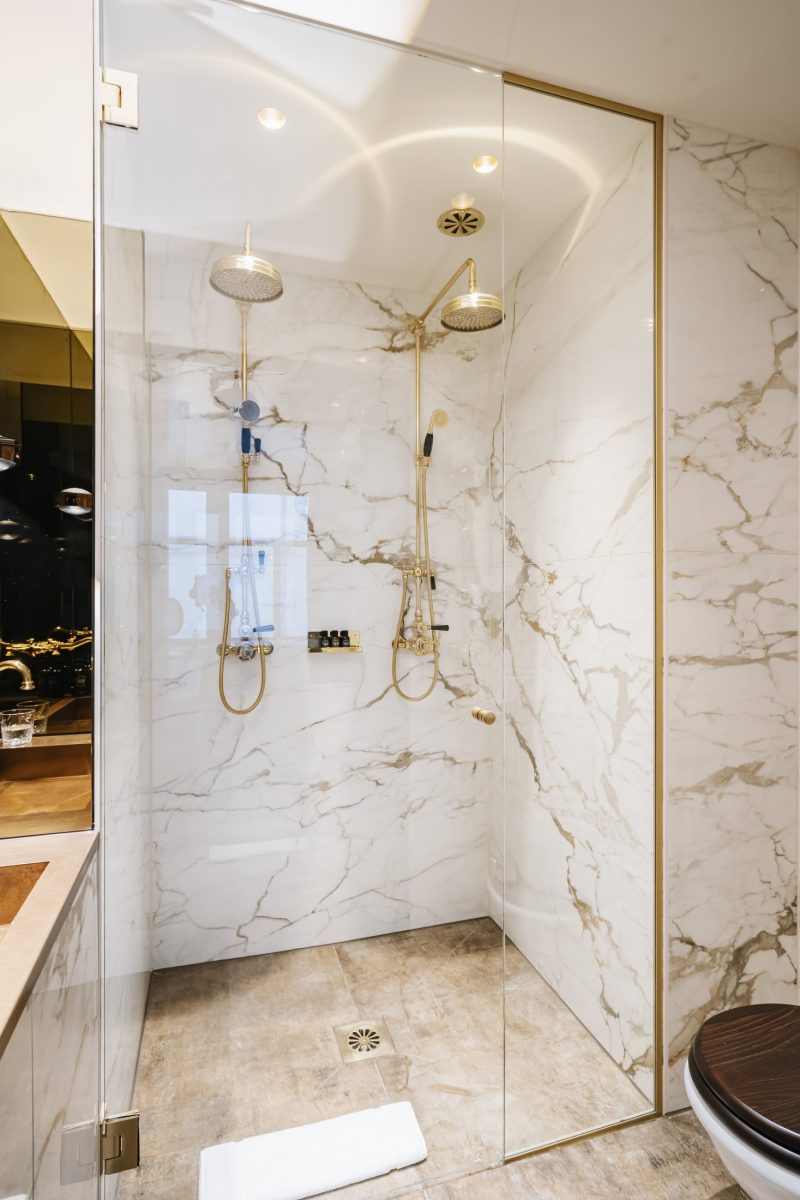 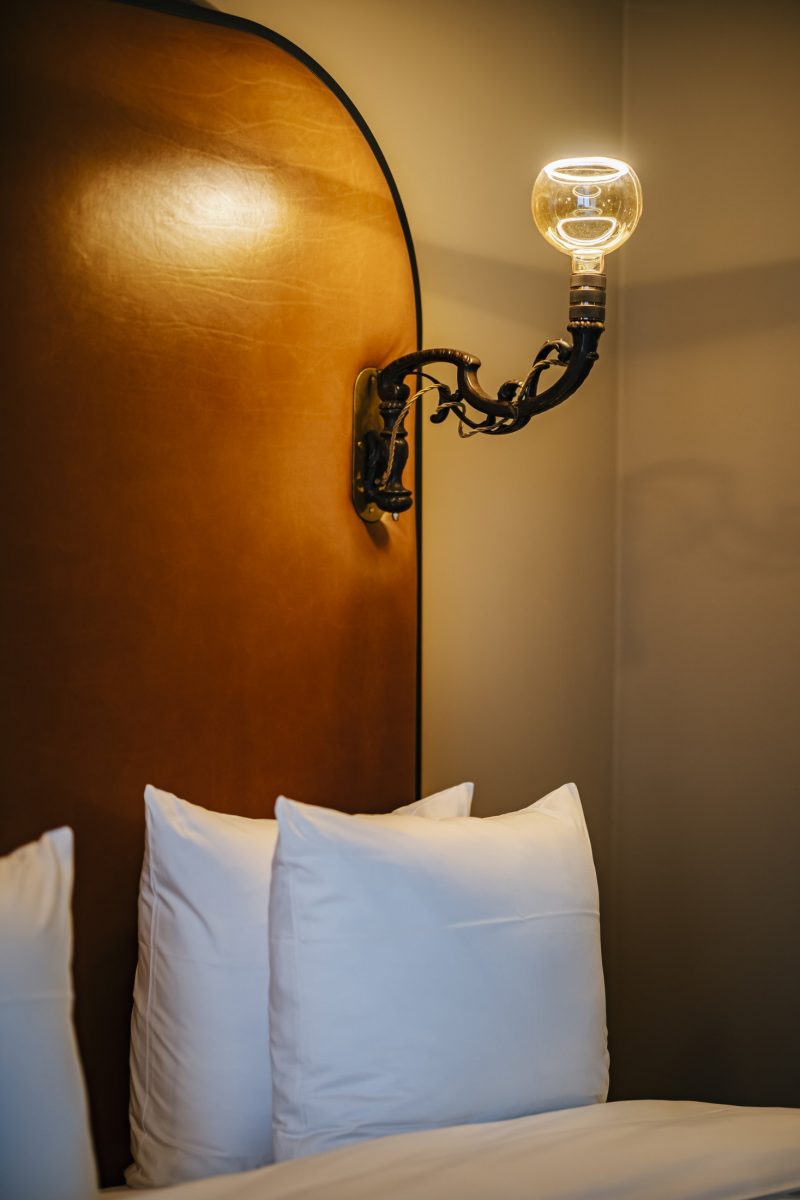 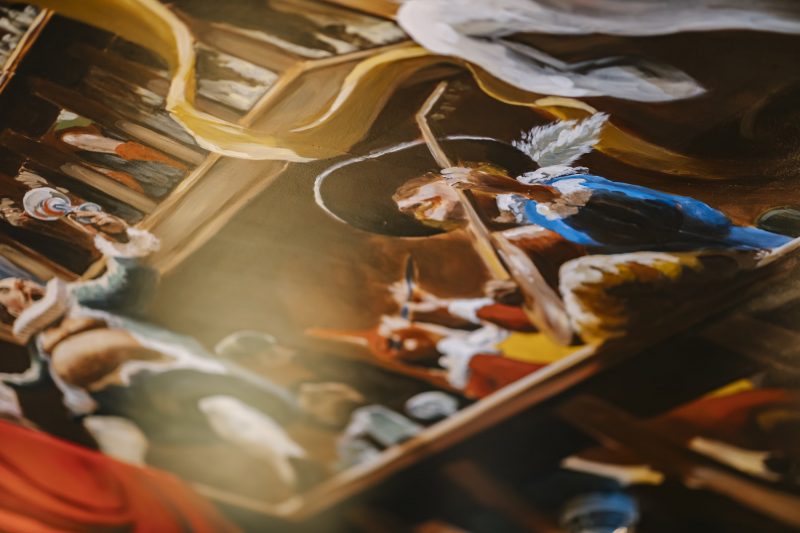 This splendid room is located on the second floor of the hotel, overlooking the inner courtyard. It features a comfortable king-sized bed, a double shower and separate bathtub; all the luxuries one might need to enjoy their stay.

The room’s design is themed around historian, poet and playwright Pieter Corneliszoon Hooft (1581 – 1647). This illustrious literary great was quite the bohemian. Born as the son of Amsterdam’s mayor, instead of pursuing a career in trade or politics, he dedicated his life to the written and performing arts. He founded the literary and arts society Muiderkring, and hosted extravagant events, entertaining a motley crew of people from the arts, theatre, literature in his castle outside Amsterdam.

The elaborate painting on the ceiling of the room depicts one of these nights of intellectual debauchery in Muiderslot. Hooft himself can be seen on the upper floor, throwing down letters to the guests downstairs. The grand chest from Muiderslot contains the bathtub. 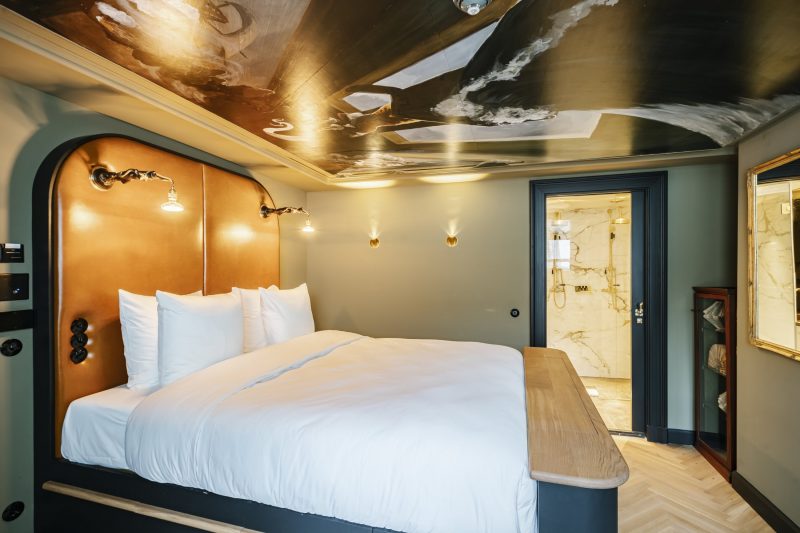 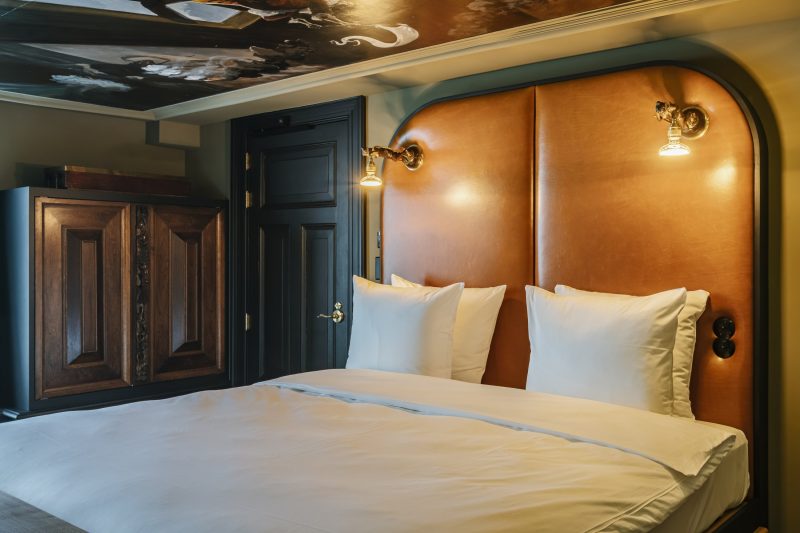 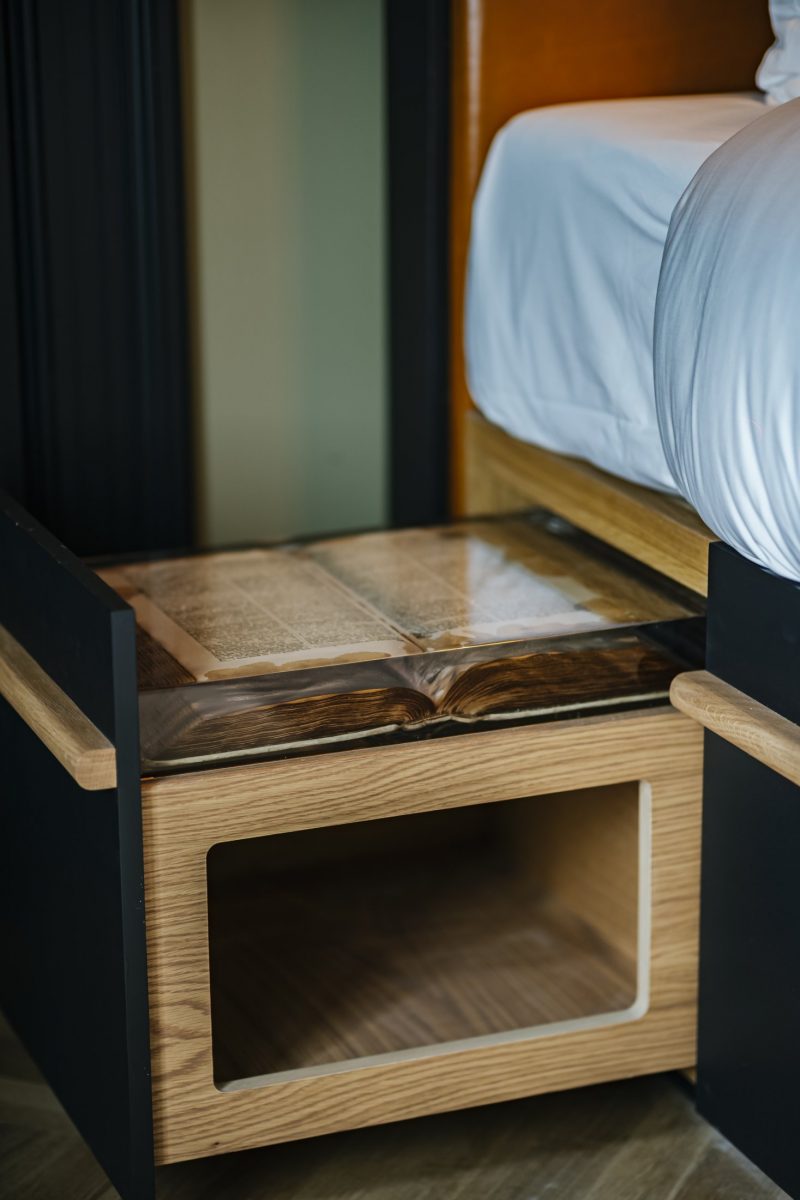 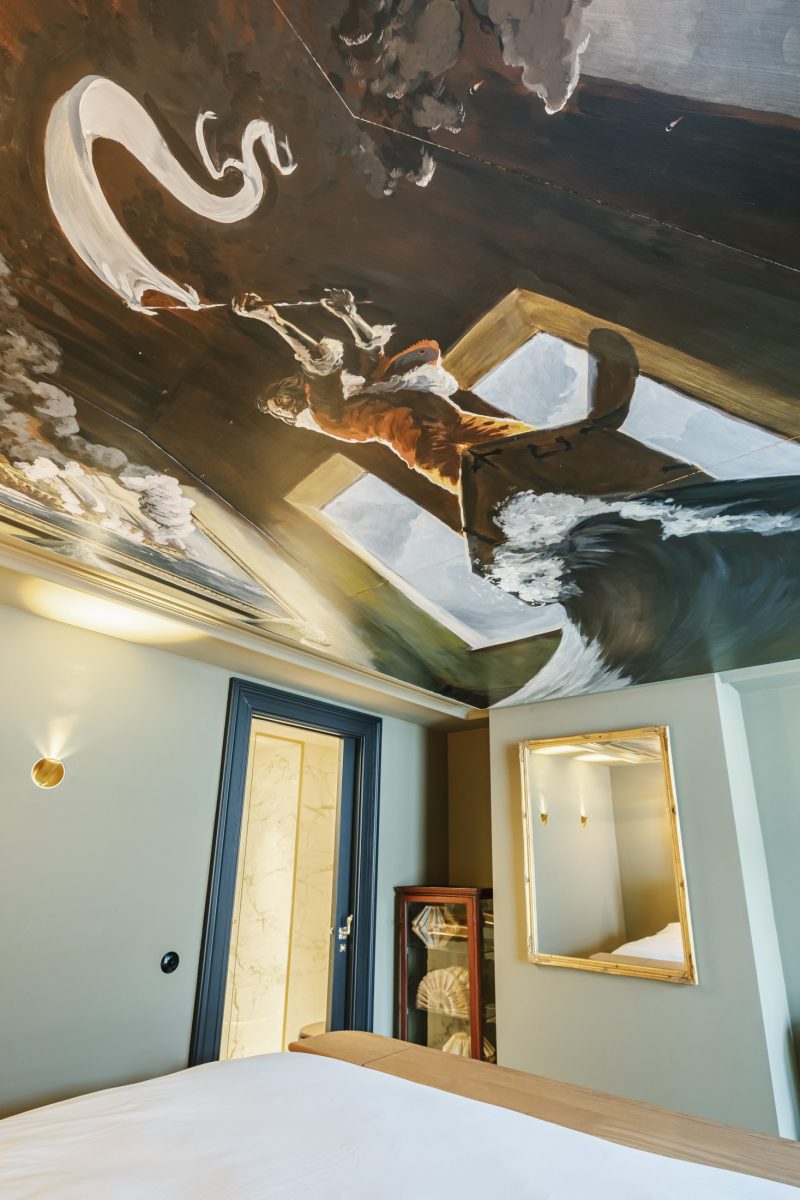 This pleasant room is located on the third floor of the hotel and overlooks the inner courtyard. It features a comfortable king-sized bed, a double shower and separate bathtub; all the luxuries one might need to enjoy their stay.

The room’s design and decor were inspired by lawyer, humanist and diplomat Hugo de Groot (1583 – 1645), also known as Hugo Grotius. With his work, he is one of the founders of international law. His most famous work includes the “law of war and peace” and the “law of the free seas”. His controversial ideas lead to his imprisonment in Loevestein Castle, from where he managed to famously escape in a large book chest.

The room’s ceiling painting depicts Hugo de Groot waiving a white flag int eh middle of the sea. It represents the peace of the seas, as described in one of his most famous pieces of work. Lady Justice bedside lamps pay tribute to his groundbreaking work in international law. The bathtub is hidden in a large chest, reminiscent of the one he escaped in. 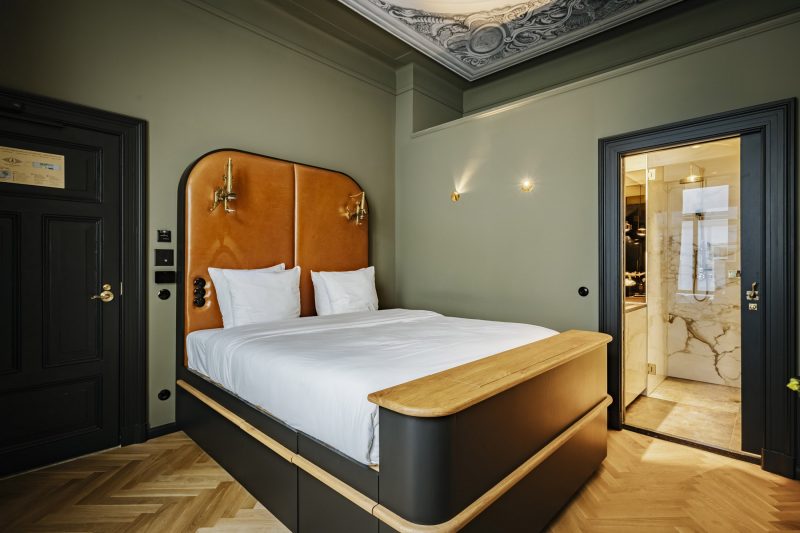 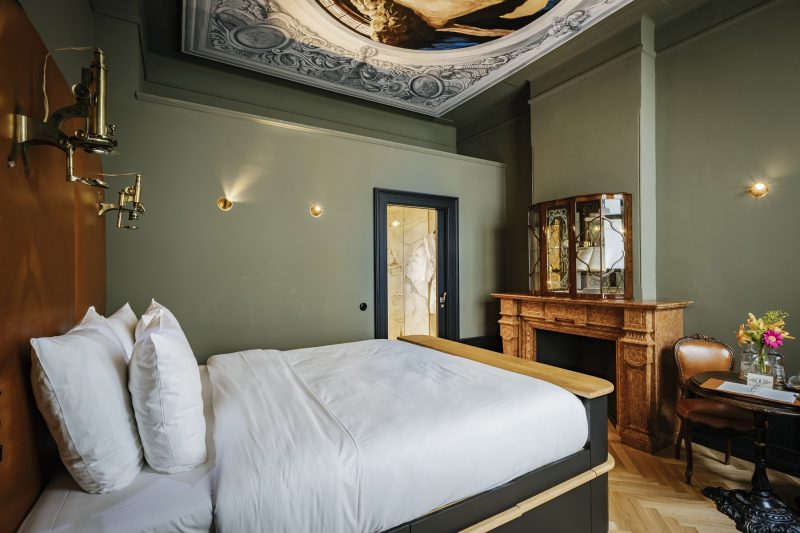 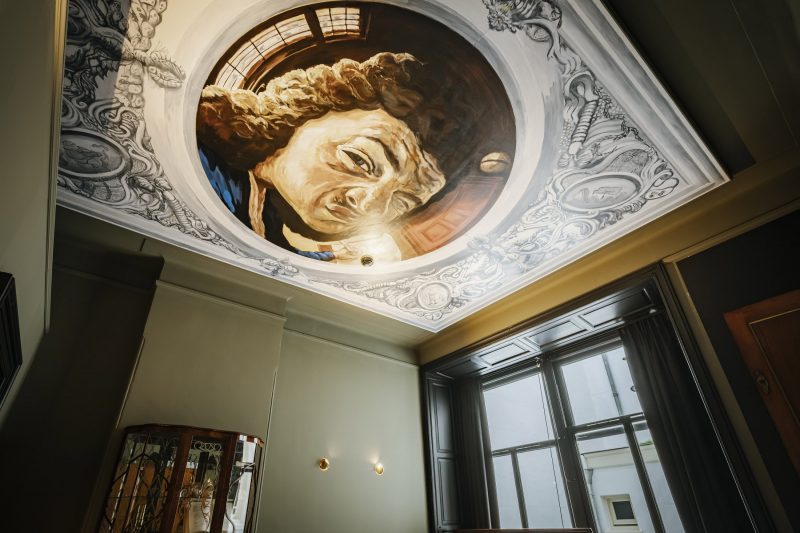 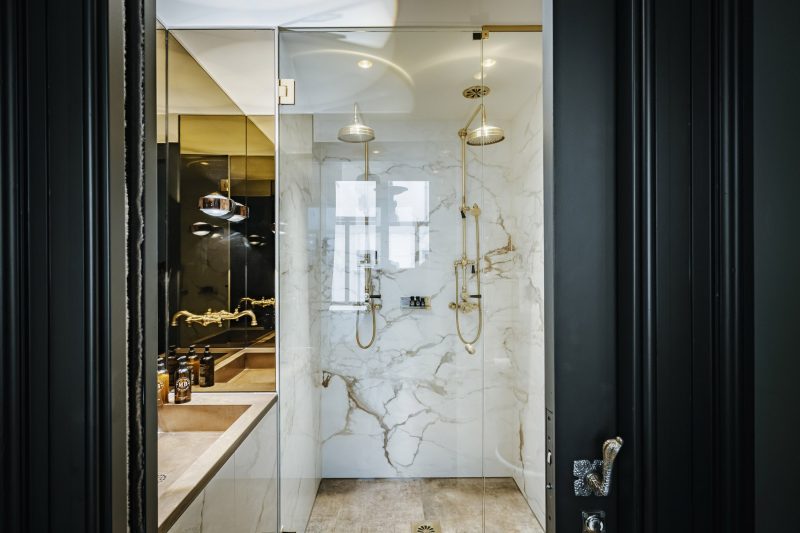 This unique room on the first floor of the hotel overlooks the inner courtyard. The high ceilings give this room an elegant feel. It features a comfortable king-sized bed, a double shower, and a bathtub.

The room’s design is themed around the Father of Microbiology, Antonie van Leeuwenhoek (1632 – 1723). This noted scientist designed and built his own microscopes and lenses in his spare time. These allowed him to be the first to observe microbes. Tsars and royals from all over Europe and beyond traveled to witness these marvellous little creatures. He never revealed the secret of his magical lenses, and for centuries, his techniques remained a mystery.

He can be seen looking down through one of his own lenses from the scene depicted on the ceiling of this room. His work and life are further represented in microscope-shaped reading lights by the bed and a display of various lenses and microscopes, one of which is a replica of the most famous of van Leeuwenhoek’s designs. 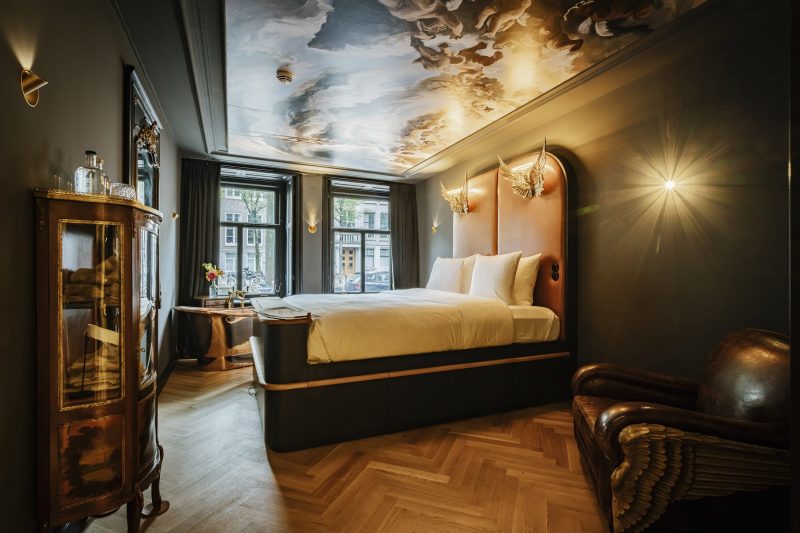 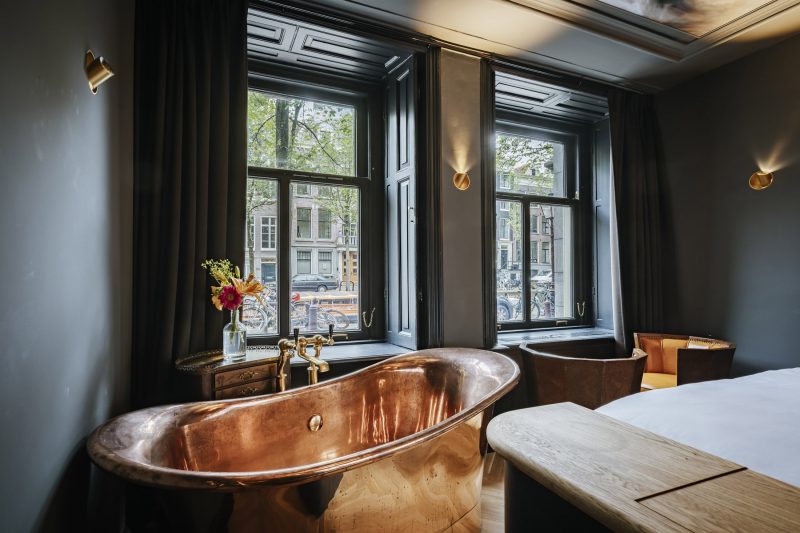 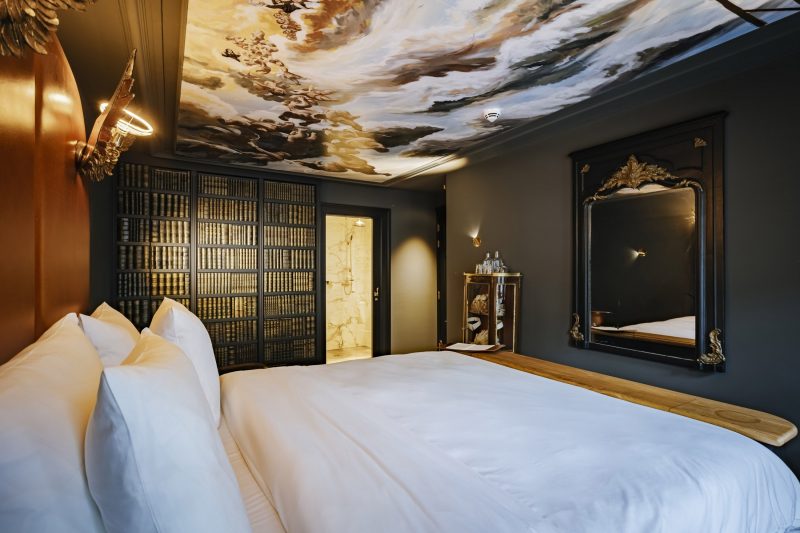 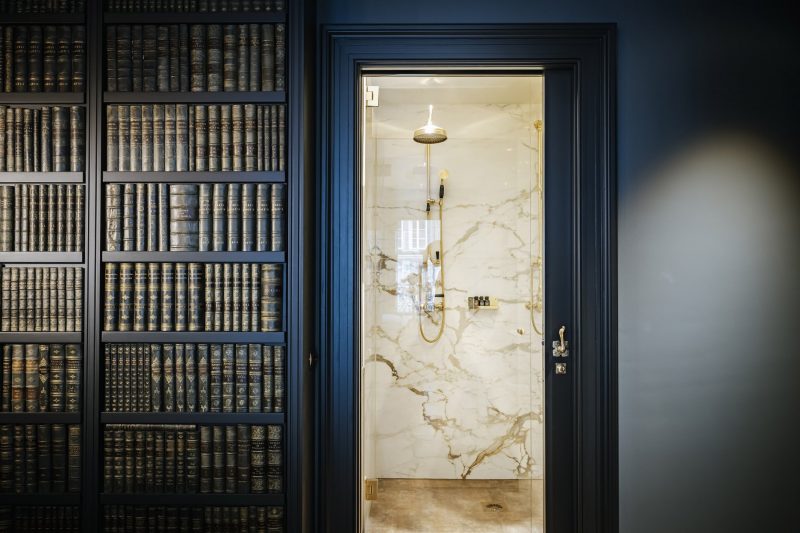 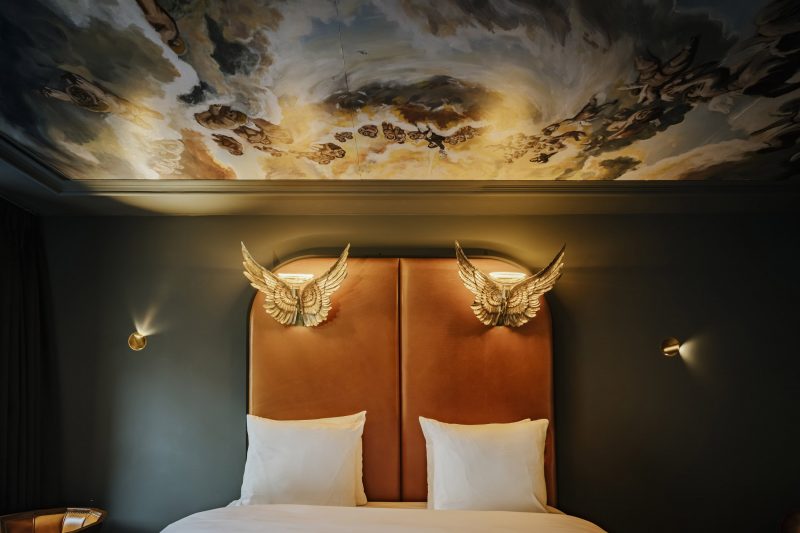 This large room is located on the ground floor of the hotel, in what historically was the servants’ quarters of the house. It boasts wonderful views of the canal and offers an abundance of luxury with a large bathtub, a double shower, and a comfortable king-sized bed.

The room’s whimsical design is themed around the philosopher Benedictus de Spinoza (1632 – 1677), who is considered one of the great thinkers of the enlightenment. He was born Baruch de Espinoza and was raised in the Sephardic Jewish tradition. However, his radical ideas and skepticism of religious doctrine, caused him to be shunned from the Jewish community and family. It did not prevent him from sharing his views that are still considered progressive today.

From a painted celestial scene on the ceiling of the room, he is seen plucking the wings of the angels surrounding him as an act of rebellion against the rules of religion. The plucked wings are reflected in the design of the leather club chair. A wall of bibles cast in epoxy, refer to Spinoza’s rejection of the Old Testament, describing God as the creator of everything. The bedside lamps, made of old lenses, are a subtle nod to Spinoza’s day job as a lens grinder, which allowed him to share his extraordinary ideas with the world.

Are you seeking for the ultimate luxurious experience, breathtaking views and high ceilings; then you should take a look at one of our Signature Rooms. 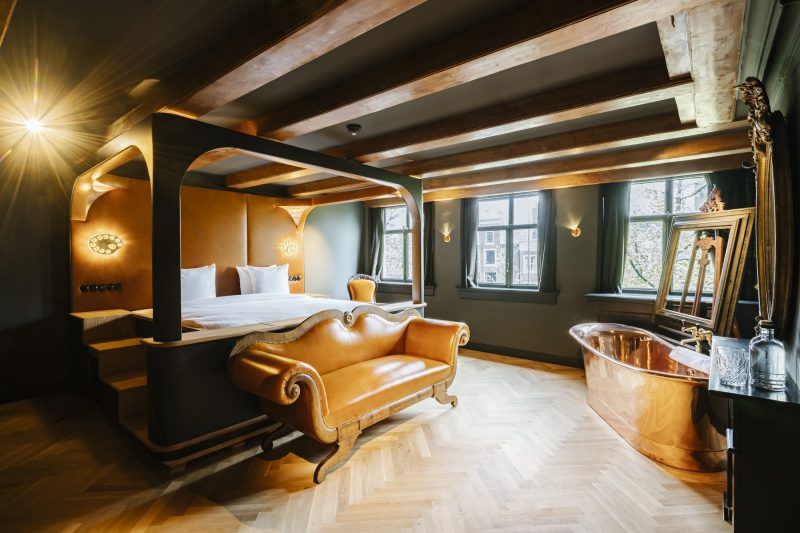